Today saw the culmination of a significant effort on the part of the Cheltenham Racecourse Station team to reduce and rationalise our ‘holdings’ of materiel. Blog readers will be familiar with the story so far: we had largely emptied out the arches store, skipped those plastic etc items which were not reusable and plied up the scrap metal on Platform 1. We felt that this was very much in line with the sentiment of Health and Safety directives that we should not be keeping (hording!) large amounts of ‘stuff’ for the sake of it – and that we should be happy with the condition of what remained. As such, and still keeping a wary eye on anything which might have heritage value, the final stage was to ship off our excess metal to Winchcombe. There it can be sifted by the relevant Departments; retained, re-used or re-purposed where possible, and otherwise sold for scrap. All this, I hope, sounds like a coherent approach, compatible with the charitable objects of the GWSR!

And, of course, we were very keen that the removal was by train – since we were moving from a station to a rail yard! As such, we needed the help of the Operations Manager and a quiet, non-passeneger day. Below is the team who did the hard work: Neil, Dave G, Dave T and Malcolm….

….and of course an engine:

After a good deal of humping and dumping it was left to Neil to secure everything; here are views from the cab and the track-side: 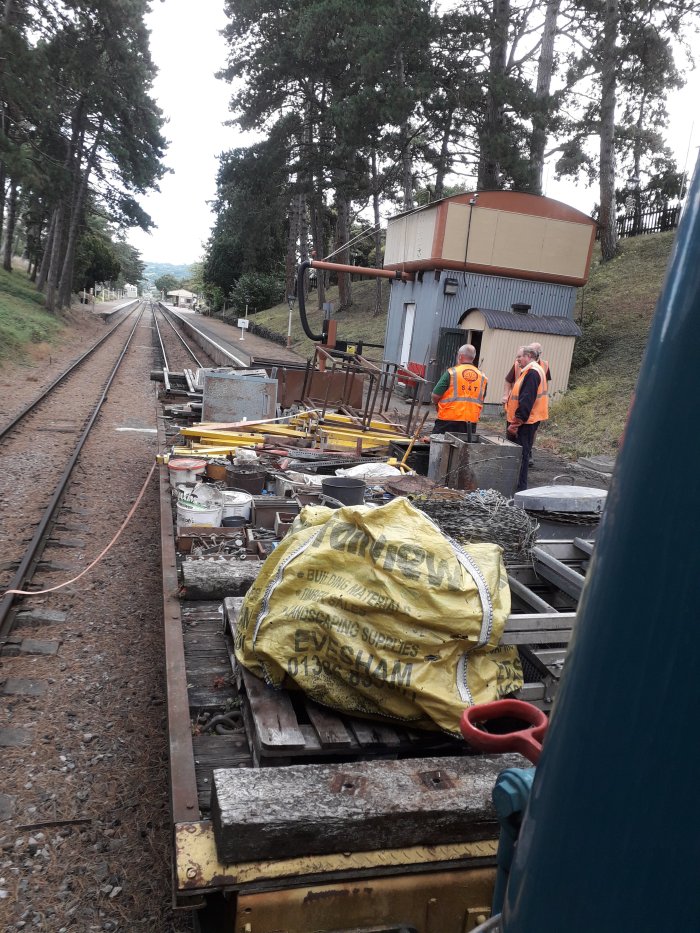 And with that lot out of the way we could get on with cleaning up the Platform and the rest of the Station which, as is readily observed, was well-covered with pine needles again – despite Saturday’s efforts!

To achieve this the Monday gang were out in force comprising John O, Ian, Chris, Roger, Mike and Mary as well as the above. When I left (early) they were all hard at work making things look ship shape for the week’s passenger services.

With grateful thanks to Neil Carr for helping us achieve all this, regards,