Several important things happened today at the Racecourse! First, Mary (& Dave T) spotted a grass snake under one of our metal covers on the Platform 1 embankment. Sadly the snake was quicker to depart than our trains and almost beat the camera.  However, here is the end of a snake: 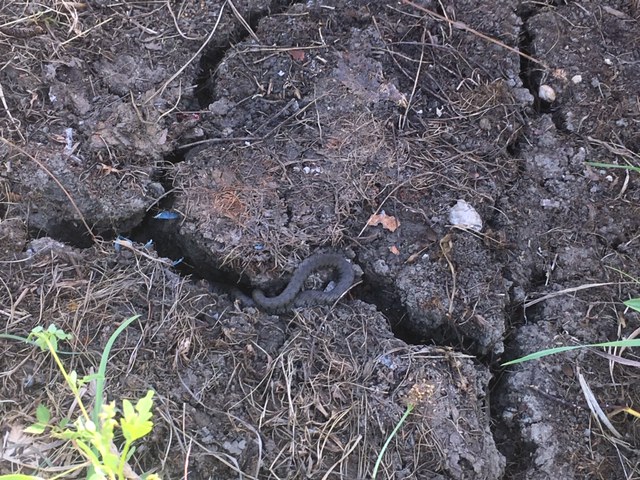 And a shy butterfly: 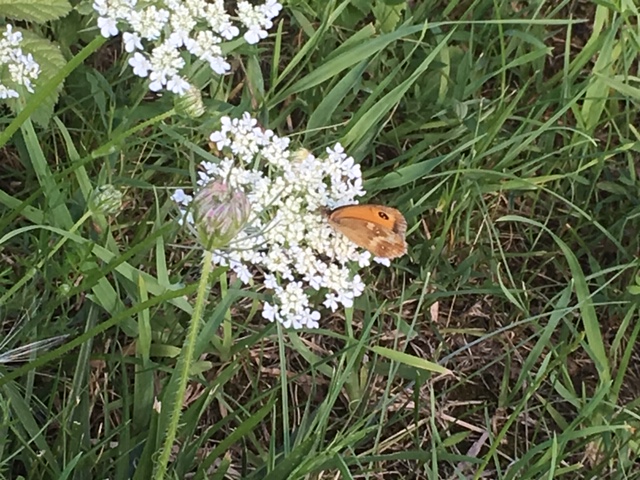 Also I think (I hope!) we discovered the missing Klargester – so Operation Fetlock may yet be considered a success.  After digging various holes in a continuous line and finding a waste pipe buried at ever greater depths today we think that we struck ‘gold’.  The picture isn’t very inspiring but here it is with spade and mattock in the foreground: 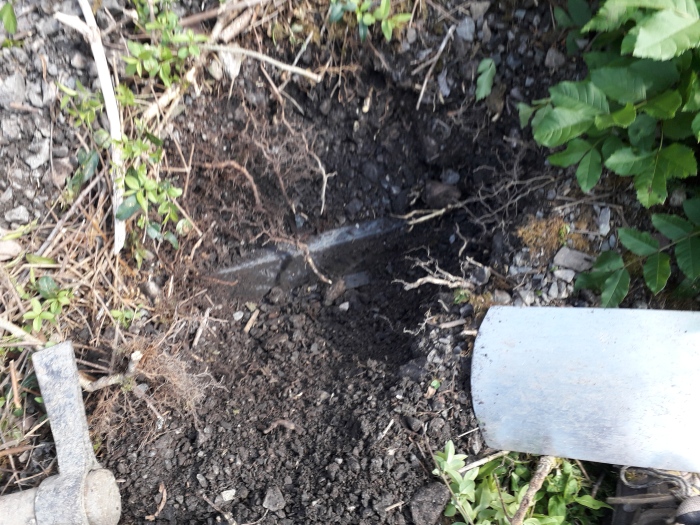 Sadly by the time Bob and I had conferred on this likely being the right thing I was too tired and it was too hot to go any further.  So the great opening – to see what’s in it after 20+ years without maintenance/emptying is delayed ’til Saturday.  Needless to say I’ll report back.

Elsewhere, a decent crop of volunteers included Dave G, Roger, John & Mike as well as those previously mentioned.  Garden watering, weeding etc was carried out plus some burning of the resultant refuse whilst ongoing painting tasks were pushed a little further on.  The platform and ramp were ‘billygoated’ for the first time for a week or 2 whilst Bob continued Mare’s Tail extermination wherever it is to be found – though we fear this task may outlast us all!  Here is the man himself doing a decent impression of a cyberman: 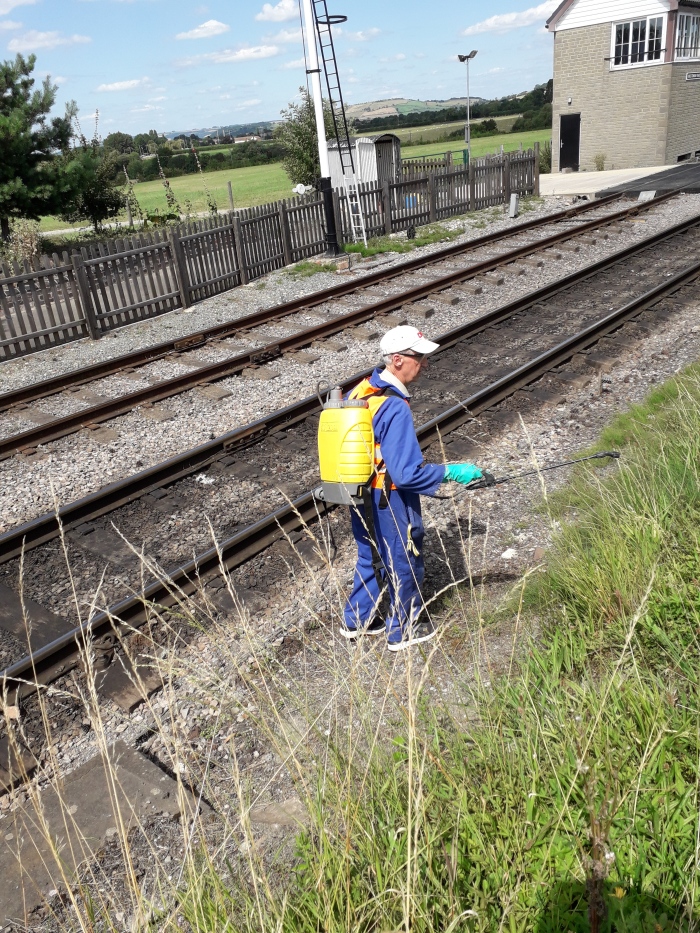 And as usual, here are a few random shots of the Station in the sunshine – this time featuring our handsome spear point fencing: 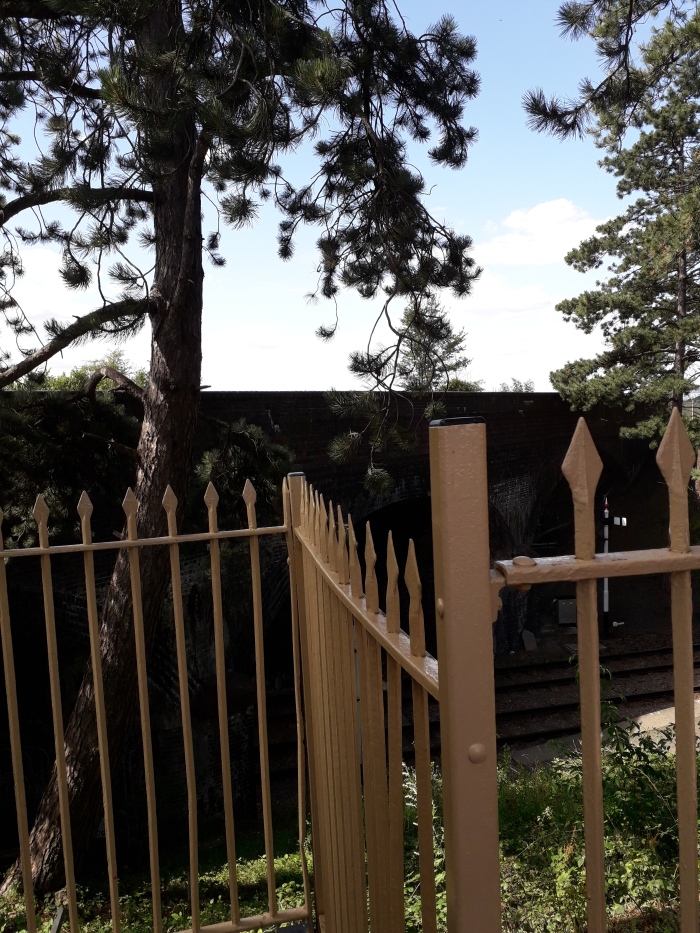 Having been away for nearly the whole of July I felt something of a stranger at the Racecourse Station this morning.  Luckily it was raining and the platforms were covered in pine needles so I soon got my bearings!  However, Mary’s pots are still blooming lovely:

Now an Orange (or is it Yellow?) timetable signifies something special is in the air and, sure enough, today marked the second day of the Diesel Gala.  Which, of course, calls for the ‘A Team’ in the Ticket Office with Dave G in charge and well supported by the finest staff: 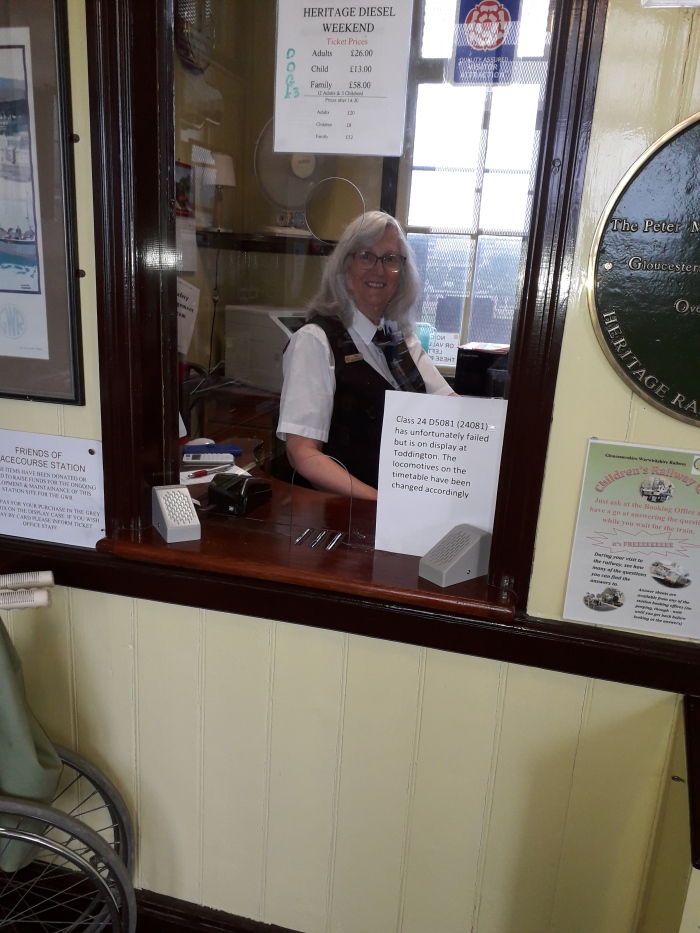 On the volunteer labouring front we were a little light (Dave T, Mary, Bob, Steve, Mike were all I spotted) though Andy B paid us a visit and here he is conferring, in relaxed mode, with today’s car park supervisor:

Elsewhere Steve and I did a little to try and contain the rampaging greenery on the P1 and P2 embankments.

It should all look like this eventually with a well managed grassy area, wild flowers in abundance and a neatly trimmed hedge.  Unfortunately we have some way to go in places:

Tools of the trade in my case were hand sickle/scythe and, in Steve’s, a strimmer.

Elsewhere, Dave T checked stocks and sales in his shop area whilst Mike attended to gardens by supplementing what was already falling from the sky (!) and Bob was busy on P2 embankment.   Here are some of Dave’s wares (NB: not the model trains) but there is much more.

I strolled around some of the ‘hidden’ parts of the Station and took snaps of the bits we don’t generally show visitors:

Here’s the vegetation fighting back again!

And so another mid-season Saturday passes by – where is the year going to?  Back next week.