There is a quite understandable ‘no fires’ policy on GWSR territory at the moment.  However, looking at the ground behind Platform 2 it would be difficult to know whether there had been a fire or not. 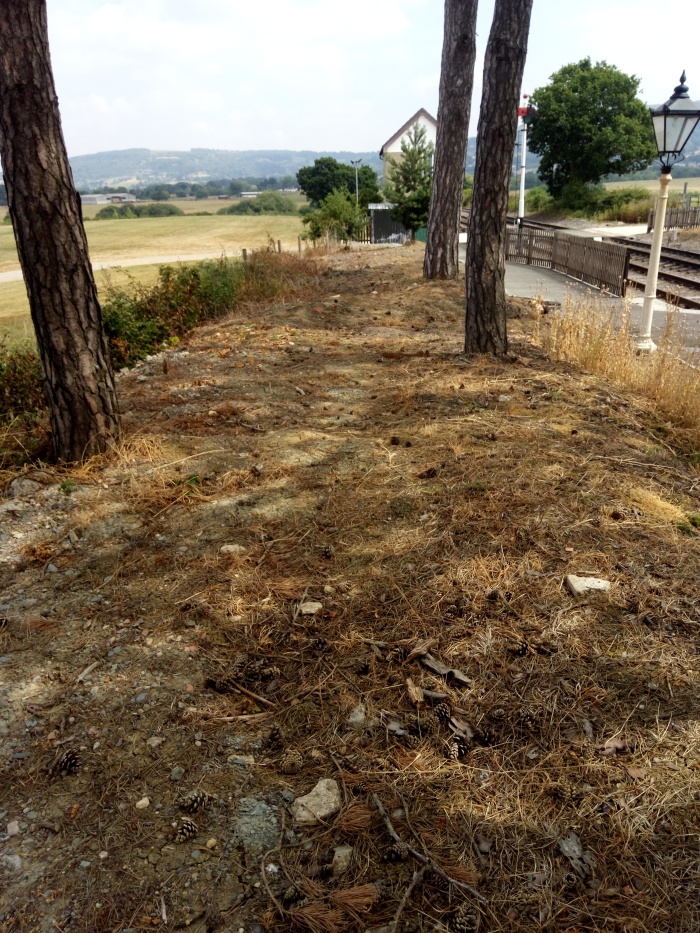 Actually, there hasn’t been a fire (and won be for some while I suspect) as evidenced by the fact that the bonfire pile is growing larger and drier by the week:

Scorched earth indeed – and much to Bob’s satisfaction – even the weeds are finding it hard going!

I didn’t take note of who was on shift this morning but spotted Bill, Ben, Dave T, Maurice, Mike, Bob, Ros & Mary, with Dave G at (yet another) meeting and others on holidays.  Ironically, the platforms were more or less immaculate when I dropped in yesterday but the brief rainfall in Gloucs overnight produced a spate of pine needs and laurel leaves – so by today the billygoat was required (Ben is now a qualified driver) and Mike did some useful sweeping.  Mary and Maurice were maintaining the flower beds and weeding at either end of Platform 1 whilst Bob and Ros were trying to keep things alive on Platform 2.

Bill, with an ever-changing posse of helpers was engage in the latest episode of the soap opera known as ‘Fettle the Shed’ – I would swear that there are more dimensions and degrees of freedom to this object than Einstein envisaged.  Here Bill is peering pensively at yet another series of bolt holes -it’s just like big boy’s Meccano really!

Dave T was (rightly) worrying over the newly planted hedge and decided to reduce the competition:

But did promise to rake up the bits from the line of my new path!

And I thought we might end today’s blog with a new caption competition: