Another glorious day weatherwise at Cheltenham Racecourse and the temperature soared. There was a smaller band of trusty volunteers  than usual – some, I know had headed for the Airshow at Fairford  where no doubt it was equally warm!

For those on duty, the idea was to stay in the shade of the trees and carry on the with regular duties of sweeping, tidying,   gardening and  watering the pots!  Everything generally comes to a halt to watch P&O ease into  platform 1 with first train of the day,  Here, having run around the rake of GWR livery coaches, it prepares to leave, tender first.

The exception to the clipping,  and snipping was the work being carried out by Bob Stark  pursuing the Mess room refurbishment task in the Ticket Office. Bob has shifted a good deal of the “mess from the mess” and things are heading towards “neat and tidy”. Sorry I didn’t get a photo of such a worthy job Bob, next time !

For my sins and helped by Stephen I was nicely cooking on gas mark 5 endeavouring to fix the door on the ‘new’ Hut at the end of platform 2. To make the door open and closes smoothly it require some round holes to be file square to avoid the hinges skewing. 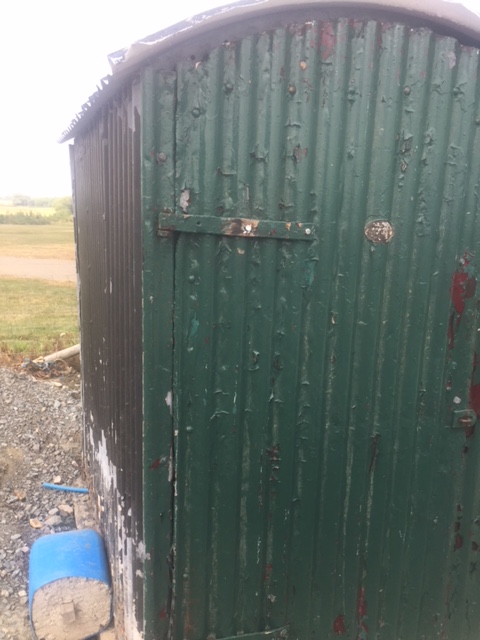 With Stephen’s  help the job was completed, ready to move on to other fettling tasks.The Hut looks as though its always been there, here viewed in panorama.

As 12:30 approach and with Head Honcho (Dave T) escaping to Toddington for AGMs and such like, the rest of the team clocked out for lunch and a well earned rest!