Such a great milestone for the GWSR  today who, after 10 years of fund raising and many thousands  of  hours invested by the hardworking volunteers, launched the first operational  service from Broadway Station southwards to Cheltenham. It will have been a day full of nostalgia  for the public and volunteers alike.  For some, a dream fulfilled.

Unfortunately our blog meisters were laid low today but the the other blogs will more than compensate with their coverage.

Bob Stark sent us the following account of his  Good Friday on the Railway.

A Special Journey on Good Friday

Today I had a very special railway journey thanks to the kindness of the Trust and the “long time ago” period when I had the honour to be Chairman of the Railway. A few of the early Plc Chairmen were invited by Trust Chairman Glyn Cornish  to join the second train of the public opening day of trains to Broadway and I attach below some images from the event.     Following a warm welcome from Glyn and Henry Howard at Toddington, we started with the journey from Toddington to Cheltenham where I felt that it was appropriate to re-enact the champagne reception of the first train to the Racecourse Station. 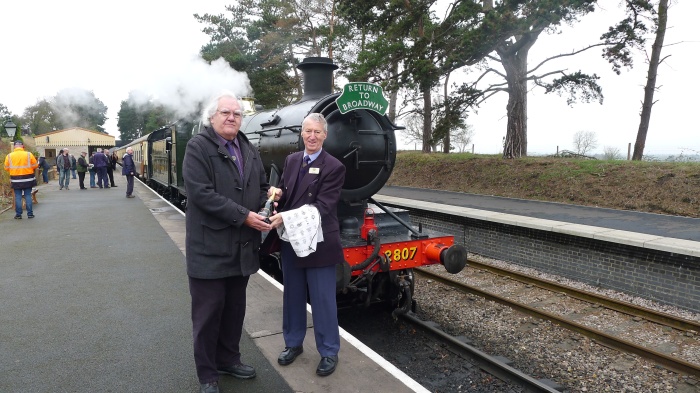 As wine waiter, I am joined in this picture by ex Chairman Garry Owen who Chaired the Board of the Plc both before and after my “tour of duty” in the 00s. Pour memoire, I attach below the image taken on Platform 2 at Cheltenham in the winter of 99/2000 when the first train into our platforms was the permanent way diesel locomotive with a works train.

These images are separated by 18 years, how time flies when you are having fun.” 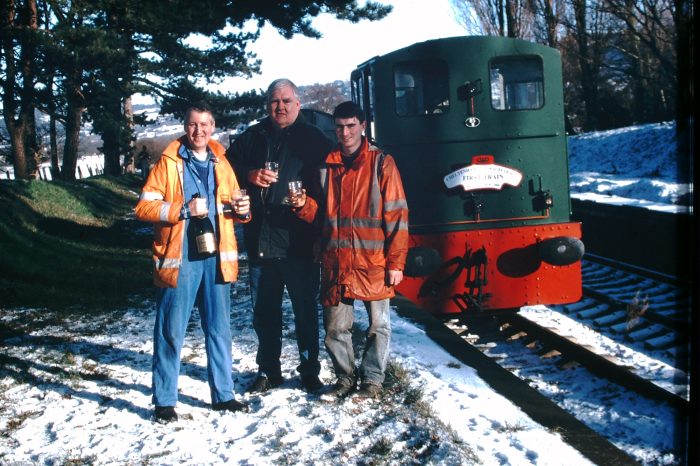 At Cheltenham Glyn and Station Master Dave Griffin kept us in order until the hour of departure arrived. I did not investigate the pagoda structure in the background, having deemed that it was unlikely to contain a bar dispensing free celebration alcoholic beverages.”

During the journey to Broadway we reminisced on the many times in days of yore when we had been asked the question “when will you get to Broadway” – my stock response was always “when we do”. Well today we did!”

On arrival at Broadway the heavens opened, but the generous proportions of the excellent canopy (in contrast to ours at Cheltenham) let everyone mingle and enjoy the ambience of the morning under cover away from the rain. Station staff were in abundance – Station Masters by the score – well more than 1- and so much gold braid. I almost felt I was back in the Army on parade! ” 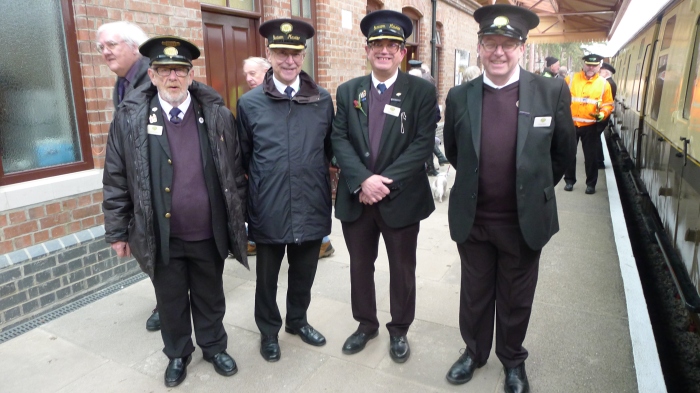 This was a very happy event topped off by excellent working “facilities” at Broadway – well done the team that completed this task against a tight deadline. We, the passengers, were very “relieved”.    Finally, in case readers wonder what happened to the bottle of Champagne shown on the first image above, we sipped it slowly between Toddington and Broadway and toasted our volunteers past, present and no longer with us who had made this day special possible. The question on many lips today was “what’s next”?