Dear Bill,
Tim and I arrived at the Station this Monday morning as the Circus was pulling out having been giving public shows in the car park opposite our station this weekend. It must be a hard life for the “roadies” as they must have been taking down the big top and packing up last night after their final performance at the Racecourse.
Our first task was to address the problems with the flush mechanism and slow refill cycle in the disabled toilet on Platform 1, neither task particularly challenging. However, ensuring that there were no drips resulting from our endeavours took a little longer than I had anticipated. Tim is now a qualified cistern repairer, so I can look forward to retirement in this field of volunteer activity. Whilst we were replacing the cistern siphon unit a small road/rail vehicle drove past the platform on the running line spraying the luxuriant weed growth that has appeared between the rails after all the recent rain. Sadly as the signal box was unmanned and the points were against changing lines, the weeds on the line adjacent to Platform 2 appear to have escaped to bloom another day.
“Flushed” (yes apologies for this pun) with success from our endeavours on Platform 1, Tim and I returned to address the small leak on the cold water supply to the new sink unit in the worker’s washroom. With the plumbing well concealed behind the new units there was no alternative but to disconnect the units (again) from the supplies and waste and move them away from the wall so that all the pipework could be inspected to trace the source of the problem. With all joints again sealed and tightened we reassembled and refitted the sink unit and reconnected all the pipework. This time we were rewarded with a non-leaking system and have completed the job by adding the doors and fitting and fixing the pelmet round the base of the units. 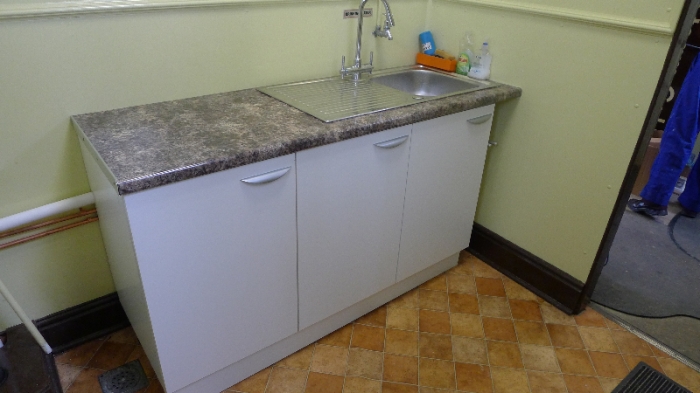 This afternoon a goodly party turned up to work on the gardens around the estate. John and Evelyn worked the garden beds on Platform 1 and John started to reap the rewards from his “Dig For Victory” garden with a first basket of produce (see below). 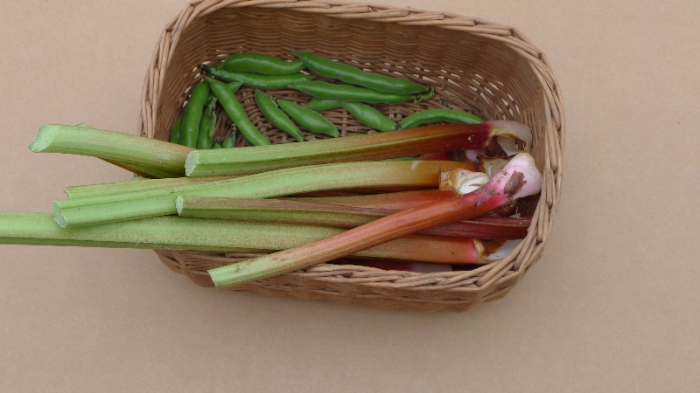 Mike, Ian and Mary were active sweeping, weeding and grass cutting alongside the Platform 1 ramp and Tim released from his plumbing duties continued the “long march” (ballast version)  bringing barrowloads of  infill up from the area near the signal box for the base of the new (ex-Broadway) shed. 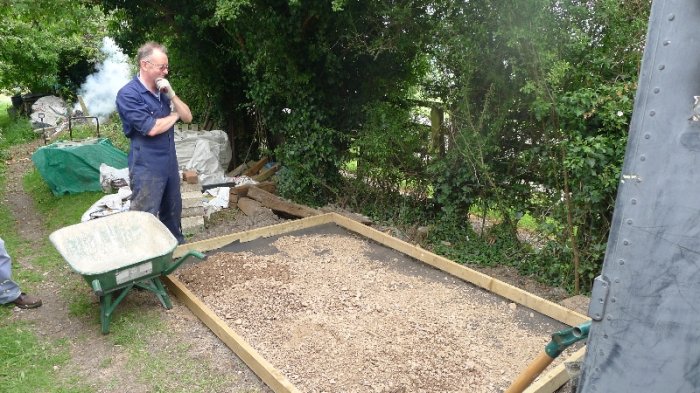 As can also be seen in background to this image Dave Tomlin took the opportunity, whilst we had no passengers and an almost wind, free day, to burn much of the mounting pile of pine needles and cones collected by “Billy Goat” in our bonfire area.
As always apologies to those active in the station this afternoon whose valuable contribution to its maintenance I failed to record above.
Bob