The natural urge of the railway volunteer is, quite reasonably, to worry most about customer facing issues, such as what the station looks like and whether the trains are running on time etc etc.  Which is right and proper, since without happy customers we wouldn’t have anything to volunteer for!  However, I suspect we sometimes put up with very modest facilities and ignore things any normal employees simply wouldn’t expect in the 21st century.  And further to this, when we do spend a bit of time (and even a little money) improving our facilities and our lives as volunteers we tend to feel guilty!  Which is by way of a long introduction to the work ongoing at CRCS to provide a slightly better environment for the staff (both Station and other workers).

Hence our opening shots this morning of Mick and Bob installing a nice new (non-marble!) worktop and sink for the staff office toilet/washroom. 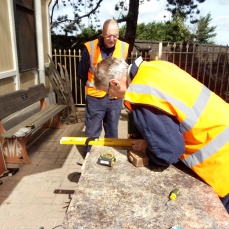 For info Mick was demonstrating his skills by doing the fitting with his eyes closed!

Elsewhere, Steve was deep amidst the nettles discouraging the rampant vegetation whilst Mary and Paul were trying to do likewise in slightly less drastic fashion! 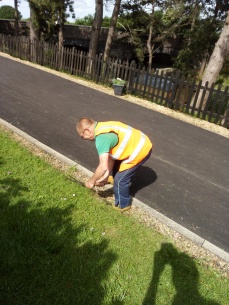 As trailed last week the ongoing storage project has added a new dimension with a spare shed being donated from Broadway.  After much sucking of teeth we have decided to ‘kit fix’ (an ‘in’ term amongst enthusiasts I gather) and make the best shed we can in the space available, from the parts we have. Here’s the early stages of re-design! 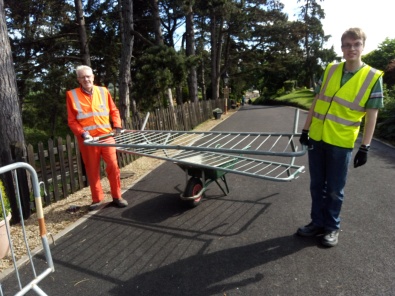 Earlier Bill & Ben cleared up Platform 2 – from last weekend’s Gala events – leaving only the handsome (and very heavy!) benches in situ.  Hopefully, if P2 gets into more frequent use we can generate some permanent storage down there.

Finally, Mike and Dick spent some time making the tea whilst I found my new role as apprentice bin man! (It takes years of training to make it look this easy.) 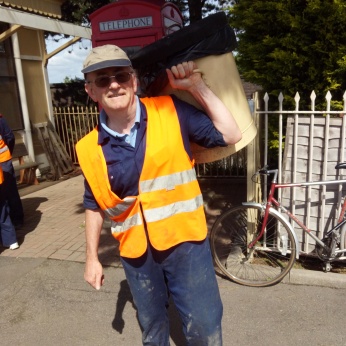 And as ever, some people proved camera shy (Dave T, Andy and Maurice) but were active making sure our hedge planting continues to prosper and the weeds don’t.

All the best,  Tim