Dear Bill,
A very busy day and I admit that I grabbed all the early arrivals to replace our entrance gate sign before the first of our passengers arrived. In their defence I admit that they were expecting to start on your container project, but the sign erection was time critical before the first train. Thanks to Mick, Ben, and Dave Griffin, assisted (I hope) by your scribe the work was quickly completed and the flood lights rewired in preparation for the home going racegoers next week. Sadly as erecting the signboard and taking pictures were not mutually compatible activities I have no image to show the team at work complete with hard hats to tick the H&S box!

The big activity carried out by Dave Tomlin, Dave Griffin and anyone else who could wield a broom use a shovel, and or push a wheelbarrow was to try and remove the evidence of the civil engineering works and the heavy plant movements that were necessary to complete the ramp repairs (see yesterday’s report). Evidence of these activities is still there in our car park, but now much diminished thanks to the hard work of the team this morning. 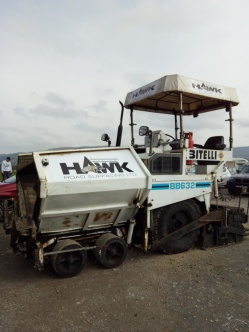 Dave T and Terry in the top photo, Dave G in the bottom photo, and one of the offending machines that managed to churn up the car park surface in  such spectacular fashion.
Around the gardens Mary was adding colour to the entrance and ramp garden beds, Evelyn and John were doing likewise on Platform 1 and Ros was adding more plants to the platform 2 Garden bed – all very colourful and well done to all the ladies. The added colour is much appreciated. Andrew and I “had a go” at the last uncultivated section of Platform 2 flower bed between the ramp and the old building foundations, removing the slagstone blocks that had fallen from the old wall and cutting back some of the soil that had come down from the embankment
Stephen amongst other repair and cleaning activity put up our new metal “Gentlemen” sign on the door of that toilet having finished the painting of the sign lettering at home – an activity I fear my hand is no longer steady enough for.
Andrew and I rewired the emergency platform floodlights where an inspection a few days ago had shown the wiring to the halogen floodlights in need of replacement. This work was carried out with heat resistant cable – another tick for the H&S box – two in one day.
Paul Ledermun was back in action with both the “Billy Goat” on the ramp and Platform 1 and with the lawn mower on the grassed area in front of the ticket office. He skilfully managed to weave between the clumps of daffodils without casualties as the image below shows. The image also shows the “VIP” interview platform that will be used by the racing TV Company next week. 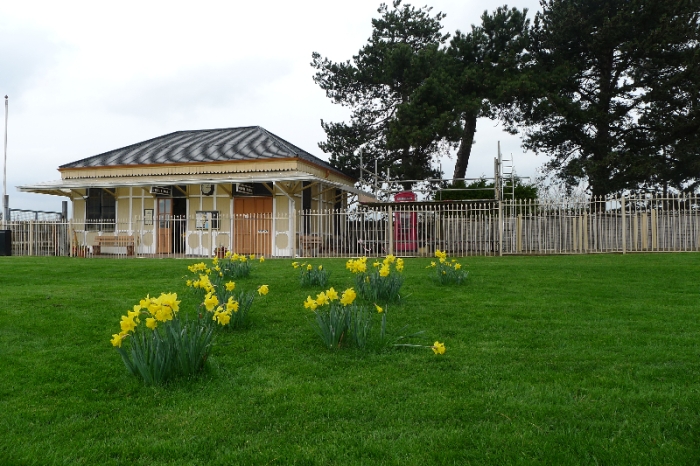 And finally from my part of the report on the day’s activities, here is what it is all about and why even we labourers of the garden beds get a thrill when the unexpected like this happens

Our passengers on the lunchtime train from Toddington and the return service from Cheltenham were treated to not just one, but TWO mainline GWR steam locomotives in charge of their train. I am advised by those that know these things that Dinmore Manor was preceded by Foremarke Hall because the latter was having an outing to test recent works carried out on it. It was an unusual treat for us all and much appreciated by our visitors.
Bob
A big thank you to Bob  who supply the above report, and Tim who added a selection of pictures. For my part the ongoing fit out of the new container seems “small beer” but Mike and Ben worked hard together in preparing a new work bench for the endless maintenance tasks undertaken by the volunteers. The bench reached the ‘kit of parts’ stage by the end of the morning and will be installed in all its glory next week.  Being  the tallest of the bunch I drew the short straw to put a coat of emulsion on the darker ceiling boards, which will brighten up the end of the container when in use.
Bill

One thought on “Saturday 11th March – the Big Tidy Up!”