There  were 7 volunteers on site today. It was a humid day weatherise, but that did not stop good progress being made. Bob, in his usual  regular fashion, has sent the following report and I have added a short item at the end, covering our activities on the new container groundworks.

As much of my family work today was on Platform 2 involved slashing and poisoning of unwanted weeds – the exception was Ros who was planting yet more newcomers into the flower beds – my BLOG contribution will be short for the sake of our younger readers. I will assume that you will cover the progress with the Shipping Container base elsewhere in today’s epic tale. [See below]
Andrew and I continued with strimming the Platform 2 embankments . It is now almost respectable from the base of the Platform 2 ramp down to the shipping container by the signal box, with only a few patches requiring more drastic action. There are no images this week since repeat images of cut and dying weeds can be distressing for our younger viewers (and boring for their parents).
In support of the Broadway Team a fourth weed killer spray application was made to the new weed arrivals on the rolled stone surface of Platform 2 – I do believe that we have now finally killed off the original crop. We also removed the latest “droppings” of pine cones and small branches from the surface, so that John Crawford’s contractor can start when he is ready.
A second mix of weed killer was made up and the survivor weeds on the track bed were also attacked. This task was not as onerous as I had expected as it seemed that many of the “enemy” were already dying. I suspect that a weed killing train has been down the line – thank you guys. Strange visitors, however, were 8inch Tomato plants growing midst the oil and ashes in the 4ft of the down line where the coaches park.
Please note dear readers – I am not asking for your guesses as to how they came to be there.
Elsewhere: Dave Griffin painted the makers brass disc on the door of the Billy Goat Lamp Hut a regal GOLD. Following a 2nd application we will include an image in a future blog and John Leeson continued his repair work on the broken Platform 1 mid point rest bench seat. Sadly this image highlights yet another task requiring action as the brick paving stones to John’s rear are again sinking and require back filling – Tim you wanted a future task post the Shipping Container?

That is it for today. Tomorrow is for traveling with Grandson as a passenger and able to enjoy the labours of others.
Bob
Container Ground Work
This short piece starts off with an apology, but honesty is the best policy! I had a late start and so, by the time I arrived , Stephen and Tim were well on there way to laying the bases of the next two concrete pillars for the east side of the container. These will require bringing up to the final level next week.  The 3 of us continued until doughnut time, which came as a welcome break in quite humid and tiring conditions.
After the tea break I was required to attend a short CAG Committee Meeting and on my return, Tim was the last man standing, having removed a eucalyptus stapling (no Pandas were harmed) and a section of pyracantha hedge. Our final labours  laid the footing of the sixth and final pillar. Like Bob, my phone camera was not active, as you all must be getting weary of pictures of concrete blocks. Nevertheless Tim’s efforts did deserve an end of day shot. 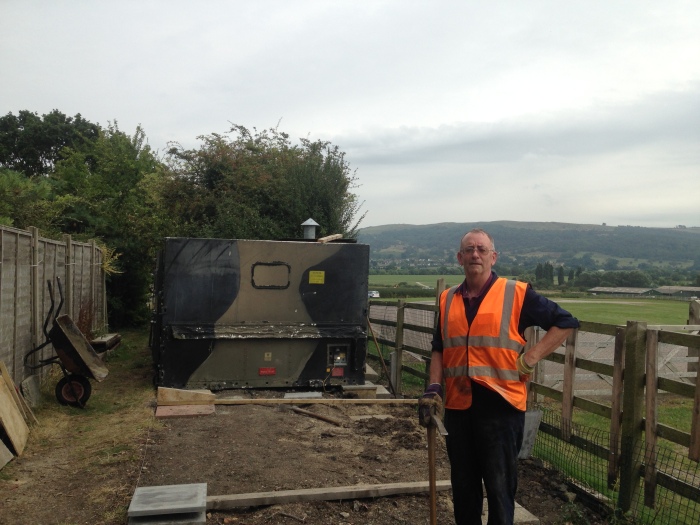 It remains for the final work  to be completed next week,and then order the container – it will be a welcome sight!
Bill
PS I will get the hang of taking a selfie !