Two reports today, the first from Tim Winstanley, who continued with the container ground work preparation and  then a general roundup from Bob Stark.

I didn’t remove the offending stump but I did reduce it in height
sufficiently (I hope) – see attached.  The advantages of having Robin with
me were that I didn’t need to work alone and he always remembers to wear his
orange vest.

I did a few extra measurements – with additional planks, bits of string and
pegs.  There is a certain amount of height reduction required here and
there.  Should be set fair for Saturday.

Bob may also have snap or 2.

Bob Stark reports:-
Bill,
I doubt that the mid week report will become a regular fixture, but today Ros and I went up to the Station for some garden TLC on Platform 2 and found a veritable hive of activity.

Tim was already beavering away at a large tree stump that might obstruct the level foundations for the long awaited shipping container. I suspect that he wished for some beavers to assist the removal of the ex black thorn bush root ball in the absence of a half kilo of SEMTEX. This looks like a saga that will continue for a little while unless some of our blog followers would like some exercise ?

Pete from the Loco Dept was also on hand when we arrived tending to the Reverse Osmosis plant under the water tank, we hear that the treated water on our railway is paying great dividends in terms of  reducing the damage and thus the cost of repairs to the boilers of our steam locomotives. As you can see from the image above, Dave Griffin finished painting the door of the lamp hut on Monday, now if only we could also paint the galvanised sides of the water tank in matching colours it would really look the part. 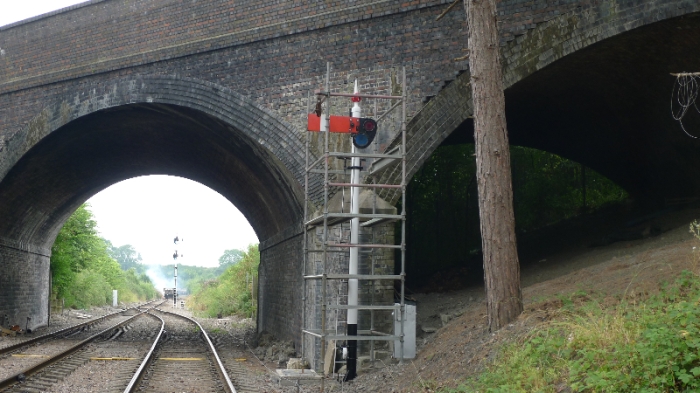 At this point we get technical. I noticed that given some hard work by Andy Protherough and Malcolm Walker on Saturday, yet another of our signals has been completely refurbished and repainted. This time I sought the identity of the signal and was informed that it is titled the Up Line Neck Releasing Signal. The classical side in me wonders how the Romans would have named such a device ? Answers please to Bill Britton with a £20 note for station funds.
Incidentally, the smoke in the distance is from Andy Protherough’s drainage maintenance team who have been cutting back the lineside vegetation to get at the drains we last looked at nearly 20 years ago. Lifting the covering slabs out of the drains where they have pushed in by unwelcome visitors has apparently not got any easier in the intervening years. 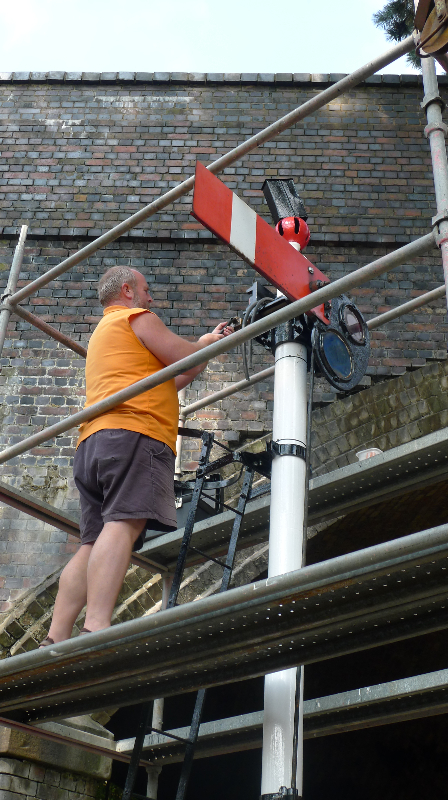 As you can see from the image above Neil Carr was required to add the finishing (technical ?) touches to the signal this morning which after removal of the scaffolding is now revealed in all its new painted glory

Whilst Ros was planting more plants in the Platform 2 garden and cutting back and treating the roots of the brambles which seem keen to join our flowers, I went down the Hunting Butts cutting to visit Andy Protherough and his team who have been refurbishing all the upper level cutting cess drainage. In recent years due to the poor state of this drainage system water has been overflowing down the south embankment bringing earth and weeds onto the formation. A great job Andy and thank you for finishing a job I started 20 years ago. Here is an example of their work in the upper levels of the cutting at Hunting Butts.

In case you wonder what I was doing other than socialising with all these hard working volunteers, I will claim a round 3 victory in the battle to suppress the weeds on John Crawford’s beautifully rolled stone Platform 2 surface. We are winning the battle, but there has been some fierce resistance.

Last, but not least,  a well dressed Cheltenham volunteer on his way to greet our visitors at Toddington hailed me from the window of the departing train.  Thank you Dick we hope that you had a good day also.
Bob