Two Posts have been submitted today, which have now been combined as follows:-
Dear Bill,
Dave G, Dave T and myself had a meeting this morning with Peter Muir and Peter Dickinson from B&S to discuss the access pathways that will be required to bring platform 2 into operation, we believe, next year ? 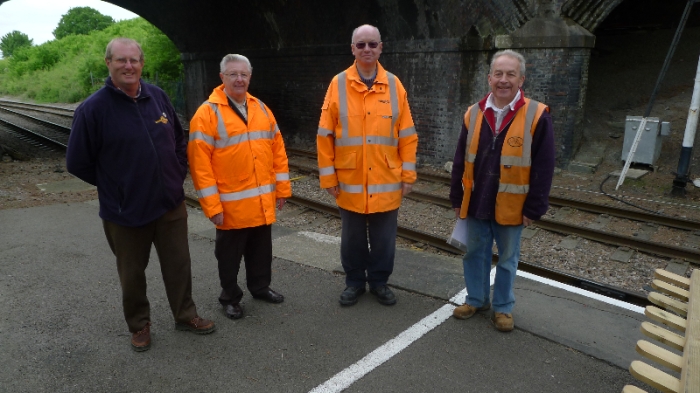 We had a very useful discussion on the way ahead for this project and for the repairs to the Platform 1 back wall and access ramp walls which have been in a sorry state for some time. There is hope that some work may take place on the ramp wall sooner rather than later. Pete Dickinson also delivered gifts of fencing panels and slats for repairs to the Klargester fencing that is showing its 15 year age – thanks Pete for the delivery and Tim for placing them into the compound.
Tim was already active on Platform 2 when I arrived excavating the water supply pipe that we had buried to protect it from the machinery being used to construct the platform and as you will see from Tim’s email below we are reaping the rewards from a little forward thinking. I will leave Tim’s report to stand on its own with his images.
Bob,
Tim’s report:  I was at CRC early this morning to take delivery of some fence palings (another story, another set of decisions to be made).  So, whilst waiting, I set to work on our potential chamber & additional ‘stand pipe’ in the middle of P2.  I am not there this coming Saturday, but you are very welcome to take it from there if you do go up – enlisting whatever help you can lay your hand on!
I had a lengthy dig around and, as we discussed on Saturday last, believe we can get a 3-way chamber in, mating with the grey pipes.  I have uncovered a good area and depth (I think) including a line to where we will want to bury the blue pipe as it comes out of the chamber on its short journey to the edge of the potential garden area. 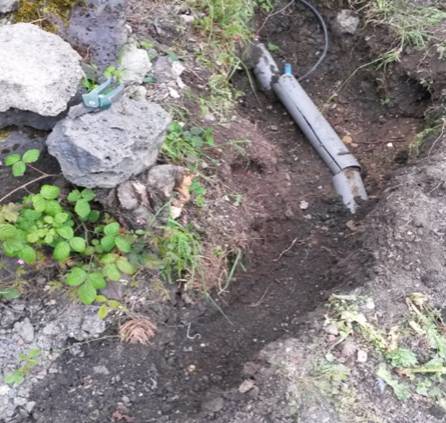 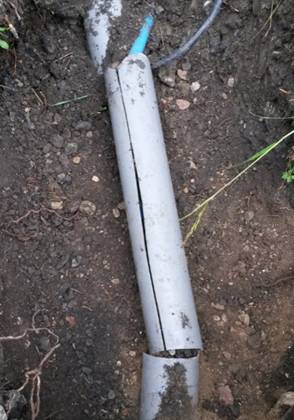 I had forgotten we put this short length of split pipe in around the water supply – a slightly bodged job! (Obviously less professional in those days!!)  However, seeing that the blue pipe appeared to go off somewhere else up the slope I discussed with Bob that we might cut this off and insert a new water pipe up the slope actually in the pipe.  Imagine my surprise on taking off the split pipe and finding we did that last time, and inserted a joint – doesn’t say much for my memory! (but a great deal for your forward planning Tim and Mick !!! Bob)

So the cut off pipe can be ignored and I guess we simply need to put in the necessary fittings and lead off the extra pipe, re-attaching the existing bit.
I have put the 3-way chamber (it’s a Y-shape not a T-shape which might be a bit tricky as I recall the blue stuff doesn’t bend much) back in the store on the rack – it is the only one we have I suspect and Bob, as you may recall, is intending to procure some extra extension sections and the necessary water pipe fittings.  More blue pipe in the store obviously.
For the record I removed a barrow load of rubble and Bob agrees that this time we re-fill with the stuff from the dumpy bags at the end of P2, rather than reusing. 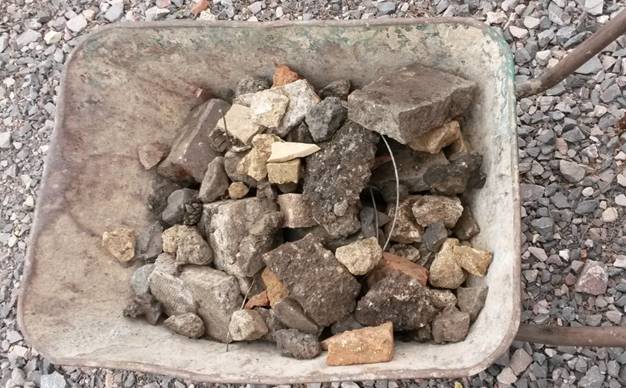