Dear Bill,
With the snow falling heavily when we arrived at the Racecourse Staion this morning Ros decided to do some indoor spring cleaning of our 1936, K6 telephone box. When I purchased this box it was in a very sad state without windows, door, or any fittings and over the years we have restored it to its current complete, but unworking state. 1935 the K6 (kiosk number six) was designed to commemorate the silver jubillee of King George the Fifth and it was consequently sometimes known as the “Jubilee” kiosk. It went into production in 1936 and our K6 has a foundry mark showing it was made in Scotland in January 1936, so it is one of the earliest ever produced.

While Ros was de-cobwebbing the box and polishing the shiny bits and the glass for next weekend’s Cotswolds at War event some of our visitors asked if they could go inside and have “selfie’s” taken The family below were Ros’s first interruption and left with their images. (We did tell them we would like to put them on our blog and they were quite happy about this) 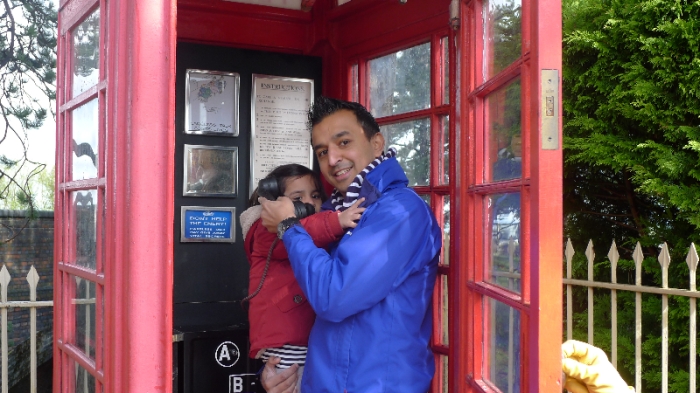 On Platform 2 Mick and Tim were completing boxing-in the new water stand pipe installed a couple of weeks ago. There is just a roof to go on the little house and then that job too will be complete.

David Miles was with us for the morning erecting our Evesham Road signage for the Cotwolds at War event and next week the serious business of decorating the station will take place. This morning I recovered some of the “stage props” from the Ticket Office attic which will be deployed for the event. Sadly given the security issues at the station we have to take everything of value in each night or it would disappear. Mick installed a hook in the roof of our Anderson Shelter for one of these “props”  – a Tilley lamp I had found cheaply on eBay.

Pat Green and Ken from Building and Services (B&S) brought back our Platform 1 running-in board this morning and with help from Tim, Mick and myself they unloaded the refurbished sign and we bolted it back into position on the posts.

Following a bit of a struggle the five of us returned the board to its rightful position and Platform 1 is now once again properly announced to our incoming passengers. Pat noted that the posts also needed some TLC and repainting. That will be a job for the summer. As you can see from the image above the snow had gone and patches of blue were showing.Our thanks to B&S for a great job.

With all the rain in the last day or two the pine needles were very wet, but Stephen exercised our “Billy Goat” leaf vacuum and cleared the worst of nature’s litter from Platform 1 and the ramp. 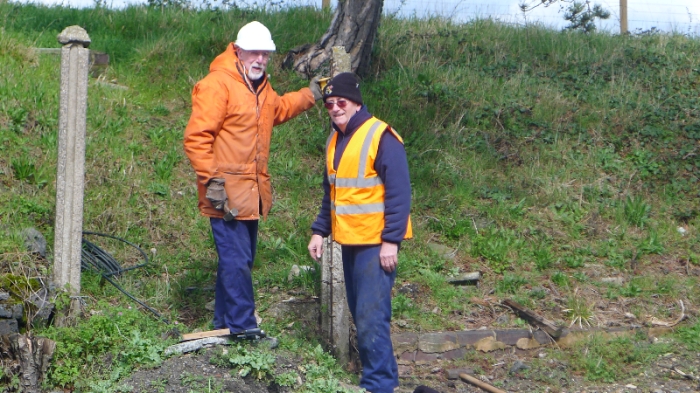 Back on Platform 2 Tim and Mick flushed with their success in erecting the Running-in board on Platform 1 decided to reconnoiter the difficulties that would arise from removing the decaying privacy screen supports adjacent to te foundations of the old GWR toilet block. These artifacts sadly have not weathered well and have suffered from concrete cancer. Their various degrees of lean and spalling of the concrete away from the internal reinforcing bars means that they cannot be used for their original purpose and their removal will tidy up the appearance of the platform. We will try and remove one of them as a complete item so that we have a future pattern, but that is a long way ahead and not currently on our project radar.
A final good news story. While I was in the compound under the Evesham Road Bridge looking for Osma drainage items to complete the ducting on Platform 2, I disturbed a Robin who seemed to fly out from a bag near my feet. I looked around and found that down at the bottom of a large clear polythene bag containing 4″ pipe joints, one of these joints contained a small nest filled with eggs. I beat a hasty retreat in the hope that the Robin would soon return to this very secure and unusual location. The compound has a high weldmesh fence so the Robin(s) have found a “des res” location secure from many predators. The CAG members have been warned not to approach this area during the next few weeks, but we will keep a look out and try and update our readers of progress of this visitor family.
Bob