A report from Bob Stark:-

Dear Bill,
Sunshine and showers.
With a weather forecast of sunshine and the occasional shower it was disappointing to be greeted by a shower this morning, but by the time the workers arrived the weather gurus were proved correct.
Our “Billy Goat” leaf vacuum was quickly pressed into service this morning with Paul Ledamun at the helm. Paul managed to vacuum the whole of Platform 1 and the access ramp in just over 30 mins – a major leap forward in terms of platform clearance. There has however been an unwelcome fallout. I have been approached by two of the “traditional” leaf sweepers (no names) who fear that they are being made redundant and that no redundancy pay arrangements have been made. They consider this to be highly unfortunate given the introduction of the new minimum wage. I have had to point out that since their management are not paid either we will have to retrain them – without compensation.
Whilst on the subject of the “Goat” Stephen Wilson added further reinforcement to the door lintels of the lamp hut this morning and following each Monday crew visit a little bit more of the outside of the hut is rubbed down and repainted.
With our Cotswolds at War event coming up in a few weeks (23/24 April), John Leeson has been tending to his “Dig for Victory” garden which forms part of this event’s backdrop on Platform 1 at Cheltenham. The other positive from this activity is the supply of fresh produce from the garden during the year.

In the background to Johns gardening image above a hole can bee seen which was excavated by Tim last week. As I noted in a previous blog, when installed the ducting made no provision for the easy insertion of new cables, a difficulty exacerbated by the chewing through of the old draw cord by some rodent. Having previously identified we had a problem by inserting drain rods up the duct from the track bed, we located the bend and this was excavated by Tim who removed it as can be seen below. 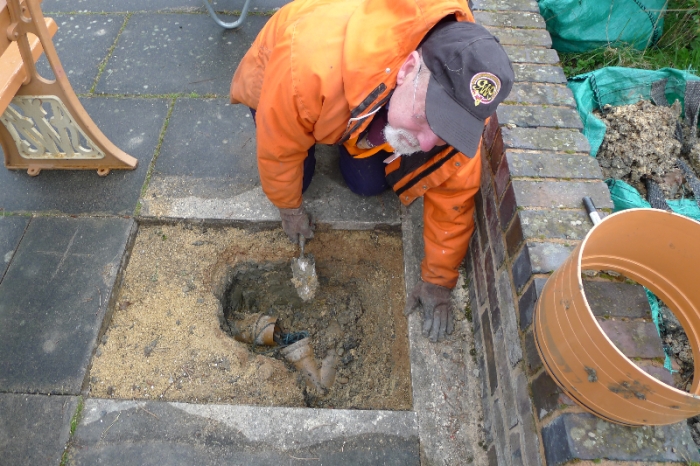 This morning Mick further excavated the hole and inserted an OSMA drain chamber on a bed of Postcrete. We also inserted a  new draw cord so that we can in future pull cables into and out of the new inspection chamber. Mick back filled the excavation this morning, but we still have to bring the chamber cover up to slab level and cut a square out of the slab. – a job for another day.

Out on the estate Maurice Turner and Terry Cruttenden are slowly working their way through the back fill on Platform 2 removing the stones and bricks left in the soil. There is clearly scope here to beautify this area behind the operational surface of Platform 2 with vegetation and flowers. We also had a visit from Pete Dickinson and his team from the Railway’s Building and Services Department clearing away some of the stones left behind on the signal box ends of Platforms 1 and 2.  I apologise to Pete that I failed to get an image of his work this morning, but a big thank you to B&S for this clearance.
Bob