Bob Stark reports:-
Dear Bill,
With the sun shining as if it was mid-summer, the scaffolders arriving as dawn broke to remove the Festival interview platform and a cry from our last station master, Terry Danter that the vacuum cleaner in the booking hall would not work,  it was an early start for some today.
At 0750hrs the scaffolders arrived followed shortly by Mick and Tim anxious to get on with formalising the water supply arrangements on Platform 2. The temporary water supply pipe work installed by the “pioneers” back in the naughty nineties did not meet with their approval and today some of my historical short cuts were first criticised, then put to right.
The Dyson responded well to some TLC and by 0845hrs fitted with new filters (is it really 4 years since they were last changed) a new drive belt and the removal of some small rocks from the carpet beater housing it was working almost like new. There is now no excuse for our booking hall carpet not looking immaculate (well almost)!
The good weather brought out the passengers today and it was wonderful to see so many smiling and  excited young faces. By the time the first steam train arrived the car park was well filled. Ros was painting the Platform 1 ramp fencing and was stopped by several of our passengers, sadly we did not manage to recruit any of them.
On Platform 2 Mick and Tim excavated the old water supply pipe and were somewhat disappointed that Bob had not fitted a stop cock on that arm of the supply. My excuse that funds were tight in those far off days did not cut mustard and as can be seen below yet another Osma drainage chamber had to be installed to house a new stop cock for the Platform 2 outside tap. 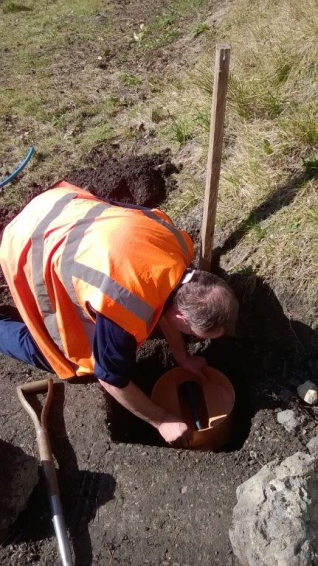 As the first train arrived we discovered that the Public Address system that had worked well first thing this morning had given up and a flat battery in the desk microphone unit was eventually determined to be the cause. This failure robbed our travelers of the dulcet welcoming tones of our Booking Clerk, Pauline, but a quick trip home provided new batteries and a working PA system. In between these minor domestic issues I managed to bring down another car boot full of now unwanted electronic items from the ticket Office attic to go for recycling. Whilst in the attic I rediscovered the only complete surviving GWR sign board bracket that was left in place on the Ticket Office when I joined the CAG in 1994. We had several replicas made from which our station signs are now hanging, but I have attached an image of the original bracket alongside a yardstick for comparison and perhaps some of our bloggers may be interested in having copies made for other GWR project locations.

Tomorrow is scheduled to bring rain for some but perhaps “sunshine” for our leaf sweepers if the “Billy Goat” leaf vacuum is assembled from it’s packing case and put into action – watch this space.
Bob

5542 takes on water in anticipation of a busy Easter Friday…