Dear Bill,
Today’s report.
With sun shining it was a case of many hands making light work – and I am not referring to the platform 2 illuminations. With Spring warmth in vogue today we had many passengers for the first steam train and 18 volunteers on hand to tackle the new, enhanced and totally free at point of delivery, Spring project list.
On  platform 2 Mick and Tim were once again pushing towards completion of the wiring of the electricity cabinet that controls the platform’s lights and will also provide a source of mains power on the platform. It had been hoped to install and connect the second isolator switch box today for the mains power (the empty space in the lower right hand corner of the cabinet), but the promised delivery from Amazon did not materialise as promised on Friday.

The good news is that the errant item was delivered to Bob on Saturday afternoon, so next week we may see Mick testing all the circuits in readiness for certification before the end of the month.

We had two smaller projects also running on Platform 2, with Terry removing the smaller stones that were left behind the edging strips at the rear of the platform during the construction phase. The longer term question is what to do with the “dead” strip of platform behind the edging strips and the remains of the old slagstone wall that is mostly buried with earth that fell from the embankment over the years. 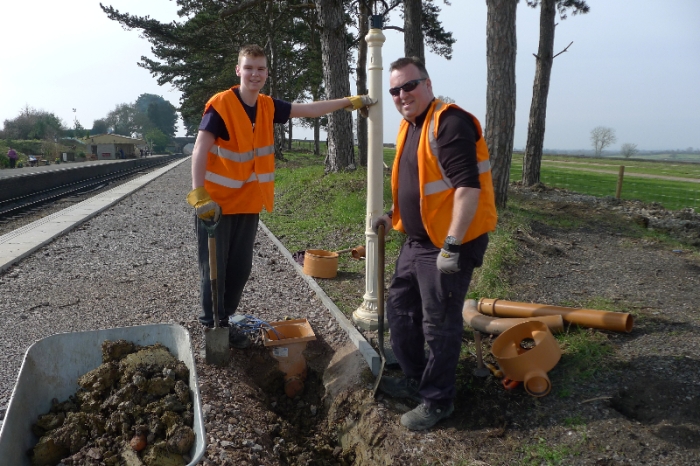 At the signal box end of Pl 2 Andrew and Lewis excavated the 11th lantern wiring chamber and dug a trench for an extension of the underground duct to an area of ground behind the edging strips where a new chamber will be installed to permit the addition of future services – such as CCTV and Public Address. We are again working on the principle (hard learned over the years on our railway) that it is easier to install the platform underground infrastructure now before an all weather surface is added.
On the maintenance front Bill started wire brushing the GWR spear fencing adjacent to the crush rails that have faded over the last few years and Ros applied a preservative mixture to the 1st section of the Pl 1 ramp wooden paling fencing. Another task that requires revisiting every two or three years.
Maurice and Stephen removed the CAG fridge freezer that for several years has been located in the Pl 1 Station Master’s office, making an already small space even more cramped. This was relocated in the worker’s room in the Ticket Office and our old fridge/freezer was retired to the Council recycling centre along with an unwanted old style CCTV monitor. 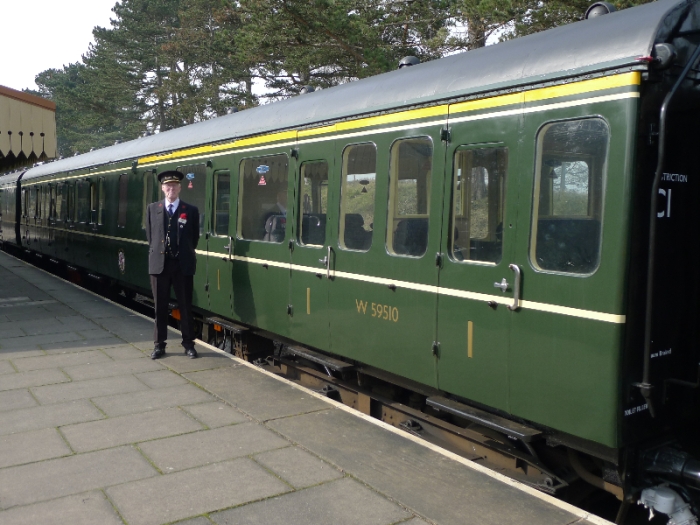 The second railway arrival at CRC this morning was the DMU sporting its newly and beautifully painted centre car with 1st class accommodation. I thought that an image of it with today’s Station Master John Tiffney deserved a place in our blog. In presentation terms, both do our Railway proud. 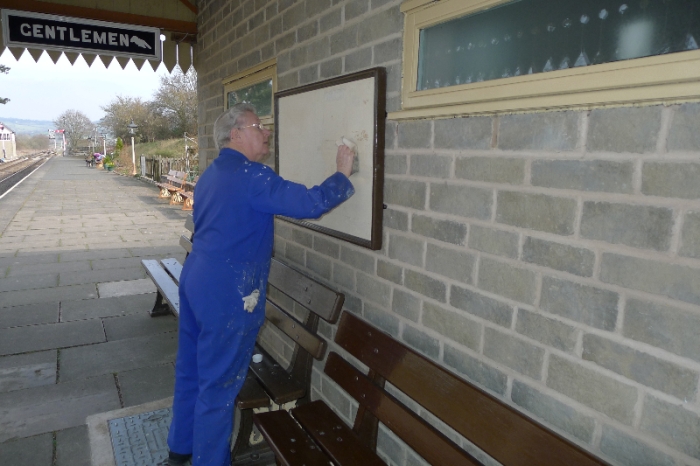 Under the canopy our own Cheltenham Station Master, Dave Griffin, was (unusually for a Saturday) not on duty and was practicing his old art of painter and decorator. Dave is seen here trying to remove the glues and tapes used to fix posters to his once lovingly painted notice boards – beware poster stickers – your actions are being recorded on our CCTV.Out on the estate Stephen and Maurice lit a bonfire and burned some of the old plywood that has graced the hidden area behind the fencing panels atop the Pl 1 embankment. With Bill Britton starting the sizing and clearing operation for the acquisition of a shipping container for secure storage of our flammable materials and large tools – a collection that has long since outgrown the worker’s room in the ticket office – clearance of the area becomes more urgent. With a good blaze going Stephen and Maurice also took the opportunity to burn branches and the pine needles brought down by the gales earlier this week and collected as usual by Mike and the Ledamun brothers. In advance of the Cheltenham festival Bob (Ledamun also gave the grass in front of the station a last minute haircut.

In the “gardener’s world” area of this report John and Evelyn Tucker arrived with a barrow filled with spring flowers to grace our Pl 1 garden bed.
And finally: After a long hunt the cast iron letters spelling out “Cheltenham Racecourse” were located in the attic of the Ticket Office and not where Bob swears he left them. We received a request from Jo Roesen to borrow some of the metal letters so he can have reproduction GWR letters produced for the new Hailes Abbey Halt. I was able to tell Joe that we could give him HEL ! – the 3 letters he required.
Thank you everyone.
Bob